Hall of Legends, Legacies and Leaders: Class of 2020

The National Fire Heritage Center established the Hall of Legends, Legacies and Leaders (HLLL) ten years ago to recognize individuals who distinguished themselves in the fire protection disciplines.  The HLLL is, in fact, the national "Hall of Fame" for the fire and emergency services.  The Induction Ceremony would have taken place today at the Fire Department Instructors Conference.   However, due to the Coronavirus pandemic, the FDIC 2020 had to be canceled.  I wish we had been able to present your certificates in a formal ceremony.

Each of you are to be congratulated on being inducted into the HLLL where you join seventy individuals who have distinguished themselves making significant contributions to the fire and emergency services.  I believe you will recognize many of these individuals. 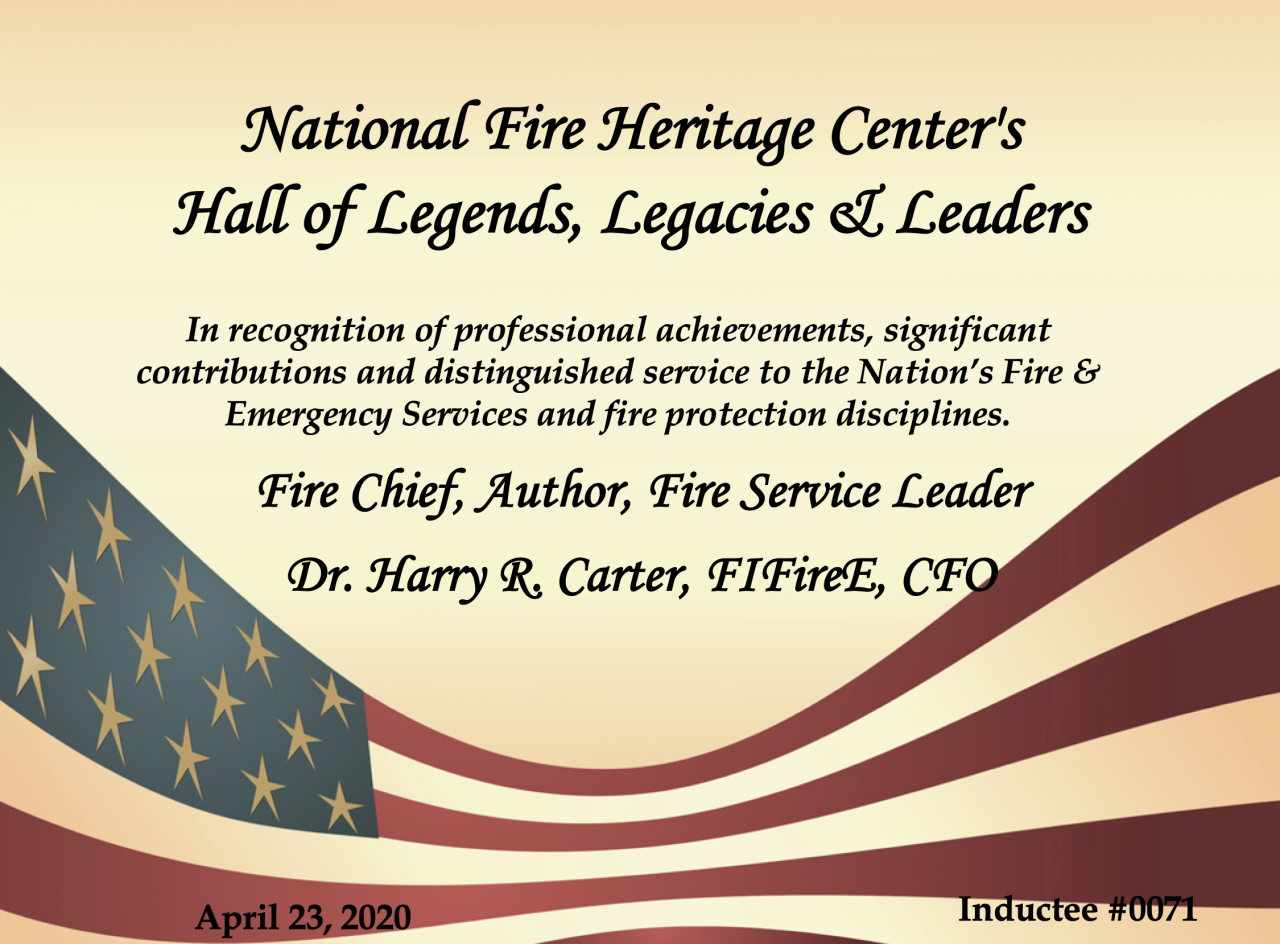 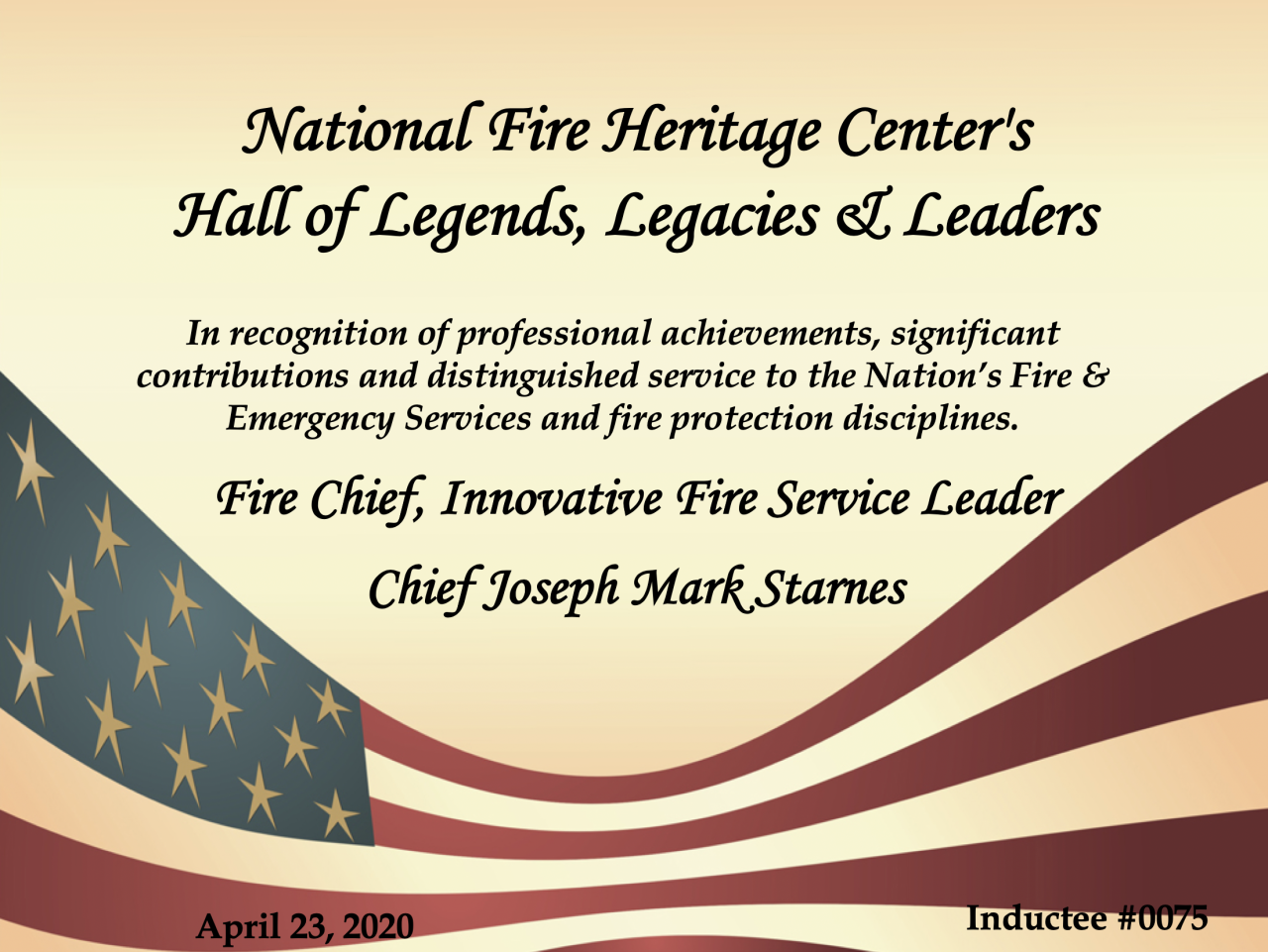 Dr. Harry R. Carter, is a veteran chief fire officer, an internationally known municipal fire protection consultant, author, writer, and lecturer. He currently serves as a fire commissioner and is Chairman of the Board of Fire Commissioners for Fire District #2 in Howell Township, New Jersey. Dr. Carter has also served on the adjunct faculty of a number of community colleges in New Jersey, as well as the National Fire Academy in Emmitsburg, Maryland. He formerly served on the faculty of the School of Public Safety Leadership at Capella University in Minneapolis, Minnesota. He holds a Doctor of Philosophy from Capella, a Masters in Political Science from Rutgers University, a Bachelor's degree in Fire Safety Administration from Jersey City State College, a Bachelor's in Arts from Thomas A. Edison University, and an Associate Degree in Business Administration from Brookdale Community College. He retired in 1999 as a Suppression Division Battalion Commander with the Newark Fire Department in New Jersey. During his tenure in Newark, he served as Chief of Training, Commander of the Hazardous Materials Response Team, and Administrative Assistant to the Fire Chief. Dr. Carter is also a past Fire Chief and former Training Officer of the Adelphia Fire Company, located in the Adelphia section of Howell Township, New Jersey. He currently serves as the fire company Chaplain. He also serves as Chaplain for the East Freehold Fire Company in Freehold Township, New Jersey. Dr. Carter is a Fellow of the United States of America Branch of the Institution of Fire Engineers, Great Britain (FIFireE). Dr. Carter is currently serving as a Past President for the branch. He is a Life Member and former President of the International Society of Fire Service Instructors. Dr. Carter is also currently the President of the New Jersey State Association of Fire Districts and is a former President of the New Jersey Society of Fire Service Instructors. He is a Life Member of the National Fire Protection Association and has served on their technical committees since 1975. He has authored or co-authored twenty fire service texts as well as publishing more than 3,000 journal, magazine, and on-line articles and commentaries. From 1977 to 1981, he served as a member of the Joint Council of Fire Service Organizations. James Dalton began his long career in fire protection when he joined the Silver Spring Maryland Fire Department as a volunteer firefighter in January of 1960. Shortly thereafter, in March of 1960, he was hired as a career firefighter. Then, after leaving to serve several years with the Washington, D.C. Fire Department, he returned to serve the remainder of his fire service career in Montgomery County, Maryland and over the next seventeen years progressed through the ranks to the position of Assistant Chief, Department of Fire and Rescue Services. In 1977, he was appointed Chief Fire Marshal for the Montgomery County, Maryland, where he supervised the Bureau of Fire Prevention and its Division of Plan Review and Engineering, Fire Inspections, Fire Investigations, and Public Fire Safety Education. During his tenure as Chief Fire Marshal, he oversaw the implementation of one of the first and most comprehensive smoke detector laws in the country. After returning from the Operation San Francisco fast response fire sprinkler tests sponsored by USFA and the Marriott Corporation in the early 80's, he began to lay the groundwork for what ultimately would become a requirement for the sprinklering of all one- and two-family homes in Montgomery County. In the fall of 1983, he was loaned to the United States Fire Administration to coordinate the development and delivery of the National fire prevention and fire safety education grant program on behalf of USFA and the International Society of Fire Service Instructors (ISFSI). Dr. Christopher M. Frasier has served a 48-year career providing fire protection, fire prevention, emergency response, and emergency preparedness services, and his exemplary management, problem-solving and relationship building skills as he managed fire protection for local communities, agencies such as NASA and corporate and industrial clients. Dr. Frasier has impacted the knowledge and leadership development of emergency responders worldwide during his career. He has mentored many of them in pursuing leadership roles. Dr. Frasier serves on Vision 20/20 Group tasked with developing a new approach to fire prevention as it applies to the American Fire Service, member of the team assembled to develop a Fire Services Staff and Command Course for DOD Fire Chiefs, providing technical guidance on fire service operations to members of United States Congress, established as a resource to work on teams performing Baseline Needs Assessments for the DOE, working with a company on the development and introduction into the market place of a new emergency services air sampling system and teaching fire and emergency service courses at local colleges. Paul is currently employed by the Texas A&M Forest Service as the Department Head for the Incident Response Department, having started with the Texas A&M Forest Service as a Contract Trainer in 1981. In 1995, he became the first fulltime Regional Fire Coordinator. He is responsible for State assisted fire protection for 254 counties in Texas and serves as Incident Commander on Texas Forest Service's Lone Star State Type I Incident Management Team. He is responsible for oversight for two major state Interagency Wildfire and Incident Management Academies and is responsible for all Emergency Response fire training for the Texas A&M Forest Service. He is Chairman of Task Force for planning Industrial Fires of State Significance in Texas, and serves on the USFS Region's Planning and Logistics Section and Command & General Staff Training Cadre. He is a valued member of the Texas Intrastate Fire Mutual System (TIMAS) Oversight Committee, Serves on the DHS-USFA Type II IMT Development Team and is Lead Instructor for All-Hazard Incident Management Team Course and Position-Specific courses. He serves on the National Association of State Forester (NASF) Complex Incident Management Course Cadre, the NWCG Operations & Training Committee, NIMS-ICS Committee, L-580 Leadership Course Steering Committee, and Incident Management Organization Successions Planning project. Paul had the vision to pre-plan and secure funding for equipment and personnel to be ready when major brush, wildland, and forest fires have threatened thousands of miles of Texas landscape and communities. He currently serves as a Deputy IC on the State Emergency Response Team for the Texas Division of Emergency Management. He served as a Deputy Incident Commander on the Columbia Shuttle Recovery. Paul is part of the FEMA's All-Hazard Incident Management Team Development Group and is part of the cadre delivering the training program across the United States. Joe Starnes is project Co-Founder and Chief of KTF (Kill the Flashover), a society of fire trades personnel dedicated to the passion for preventing thermal injuries and death to firefighters. KTF is an ongoing project of live fire testing of the impact of fire suppression tactics on fire behavior. For more, read www.killtheflashover.com. Chief Joe Starnes is retired from AT&T (43 Years) as a Six Sigma Quality Manager, Six Sigma Black Belt, and Disaster Recovery and Business Continuity Manager. Some of the most notable responses were the World Trade Center and many hurricanes such as Hurricane Katrina. As well as the Chief of KTF, Joe is currently the PIO and Fire Behavior Specialist with Oak Grove Volunteer Fire and Rescue in Kings Mountain, NC, serving under the leadership of Chief Davis. He is an internationally known author and speaker on Fire Behavior, Command, Process Management, and Leadership. Chief Starnes has served as a volunteer since 1978, in most of his roles and the Fire Chief for Sandy Ridge VFD (retired). Lee R. Starrick, Sr.'s fire service career spans forty-two years' service in municipal, military, aviation, and industrial fire departments. During his thirty-five years with the Kennedy Space Center Fire Department (KSCFD) he served as Firefighter, Driver Operator, Crew Chief, and Lieutenant. Starrick served on the Apollo 16 Astronaut Rescue Team and the Space Shuttle Pad Rescue Teams for 73 space shuttle launches. His Pad Rescue team service included overseas assignments on the Transoceanic Abort Landing (TAL) Rescue teams at one for four TAL sites in Africa and Spain. Starrick epitomizes the "Preserving the perishable" mission of the National Fire Heritage Center in that he recorded the daily events at the Kennedy Space Center fire department and maintained an extensive historical record of the KSCFD role in the NASA space program. Starrick was instrumental in retrieving and preserving extensive boxes of photographs and documents destined for disposal. Since 1984, Starrick has served as a Docent for the Air Force Space and Missile Museum and as Space Artifacts Administrator for the Space Walk of Fame Museum.

Oral History Tools of the Trade and Interview Questions